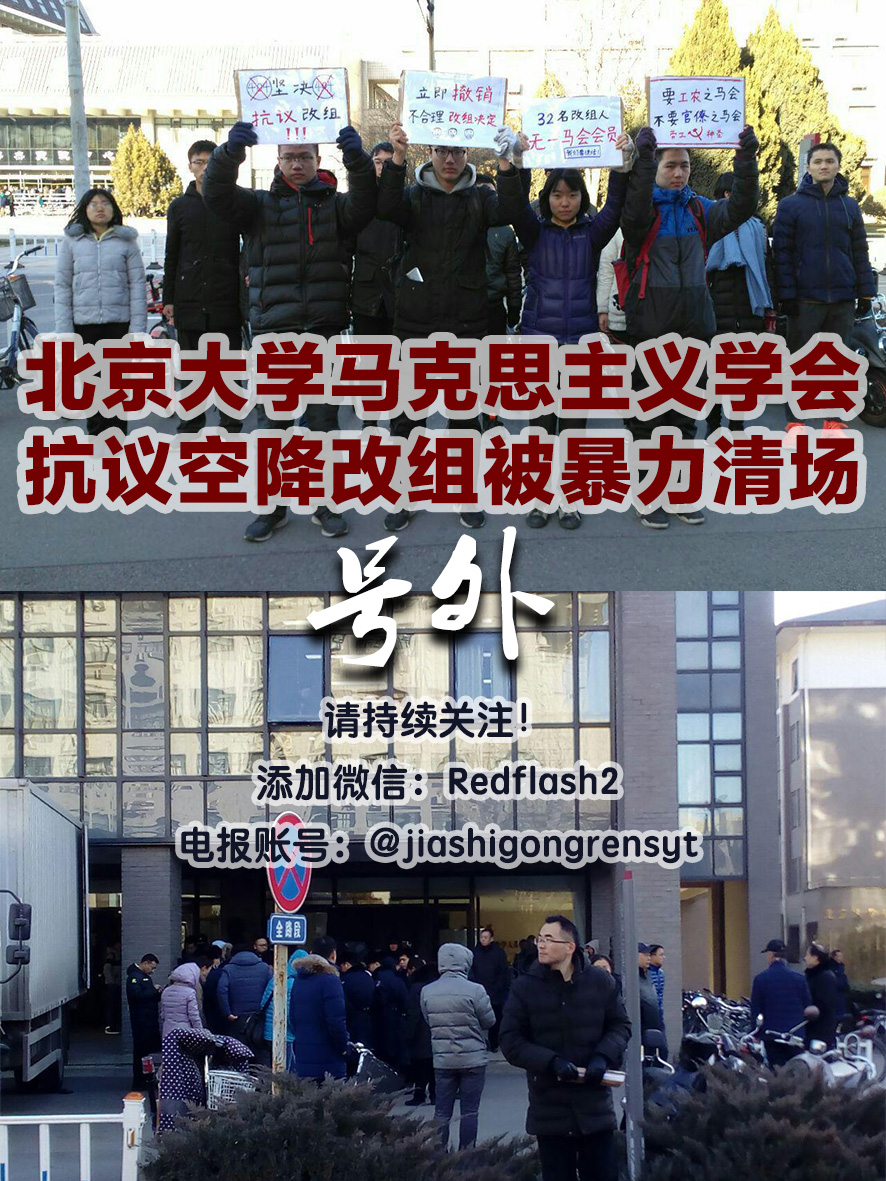 At 14:10 of Dec. 28th 2018, students from the Marxism Society held up signs near the southeast gate of the university to protest PUK administration’s forced and unilateral “reorganization” of MS.

After the head of MS, Qiu Zhanxuan, was questioned and kidnapped, PUK admin announced that the Society was forcedly reorganized for violating certain administrative rules in PUK’s web forum. In its announcement, PUK admin listed the names of 32 executives for reorganizing MS who were all from Communist Party of China, a self-claimed Marxist party. But some sources claimed that none of the 32 person has been the member of the Society.

Such reorganization irritated members of before-reorganized Marxism Society. And this morning, they published a statement and a joint letter with dozens signature to protest admin’s activity. The discontented students tried to submit their petition to the admin, but were refused toughly.

After MS students held up protesting signs, PUK’s notorious Security Department deployed many security personnel to block campus roads and prevent the pass-by from taking photo. Some minutes later, 20s security personnel of SD and supervisory personnel of Student Affair Department rushed into the mass of MS students, pulled out and assaulted protestors. Some students were even beaten down to the ground, fingers blooded and glassed broken. Finally, they were be pulled into a nearby building.

MS students tried to escape from the building, and protest admin’s violence and the violation against the personal rights. But the security personnel violently pulled them back, and a girl was even held against the wall. By struggling, some students rushed out and sent the information out.

At 15:15, three students were detained in a meeting room, and their cellphones were robbed by security personnel. A student’s hands were held behind his back, and he was detained in one room.

At 15:34, the SD personnel started to crackdown protesting students. All protestors were detained.

At 16:40, the detained students sent information out via app. They claimed that they were detained in a classroom, some students’ glasses and shoes were pulled away, and clothes was ripped apart. Some girls’ clothes was even lifted up, and their trousers were even pulled off.